AKASHI WHISKY
This is whisky blended in the scotch tradition, with Japanese precision, the malt is lightly peated, and vatting is mostly ex-bourbon, balanced by White Oak’s unique variety of barrels.

TASTING NOTES: The nose is very fruity with apricots and dried fruits, and a shy note of honey.

Located just a distiller’s leap from Kobe Bay, Eigashima is the closest whisky distillery to the coast in Japan. The ocean laden air is reflected in the whisky’s savory, saline driven purity.

Akashi is named after its hometown -- translated as the “Sun Rise City” -- where the owner’s family has been making traditional Japanese alcoholic beverages, like Nihonshu, for over three centuries.

Founded in 1888, Eigashima holds Japan’s first whisky license, issued in 1919. serious malt production did not begin until 1984, when the current copper pot stills were put into action and a focus on premium whiskies began at their “White Oak” facility. Following a program dedicated to crafting an insanely fine, super sipping whisky, they limit production to ensure that quality is preeminent, making Eigashima’s Akashi one of the rarest whiskies on the planet. 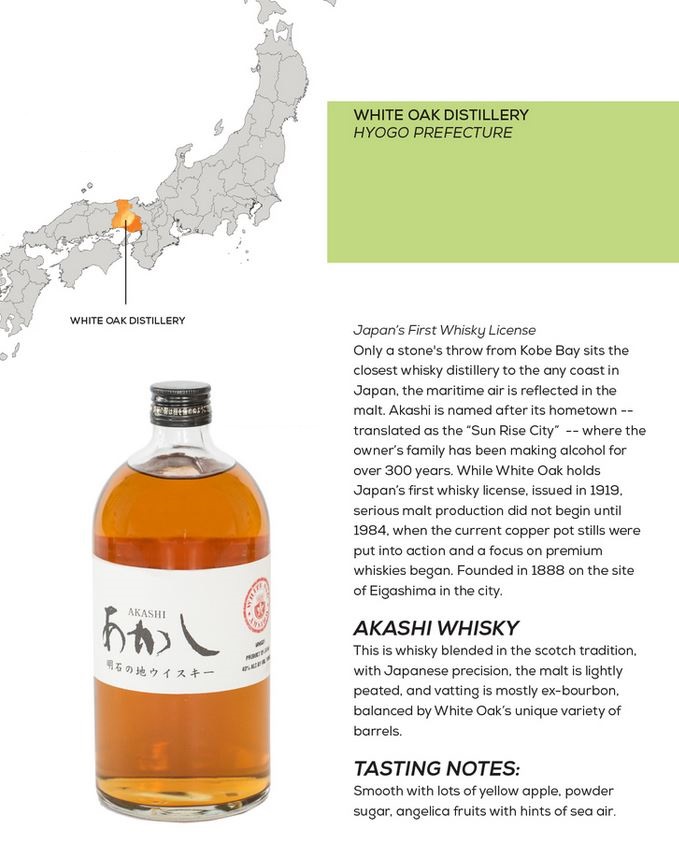