How Single Malt Whisky is Made

Single malt whisky is the type of whisky most closely associated with Scotland and is the whisky produced by most of its distilleries.

The first stage into making whisky is to the three basic raw ingredients of malted barley, yeast and water, and to make beer with them.

Malted barley is barley that has been "trickled" into growing.  To do this, the barley is soaked in warm water and left to germinate.  After a while, the cell walls of the grain will break down and a shoot will begin to grow.  The traditional way to do this is to lay the malt out on large floors.  The more common practice these days is to but the malt from commercial maltsters who use automated systems.

Germination releases starched and enzymes.  The starches will become the sugars required to malt alcohol, and the enzymes enable this process to occur.

Germination has to  be halted before it goes too far and destroys the starches.  This is achieved by kilning.  Malt is spread out on a metal floor above a furnace and dried by heat applied either directly from the furnace or indirectly by hot air that is passed through the malt.

It is through this process that smoke from burning peat may be employed to add flavor to the malt, eventually giving the final result, smoky and medicianl characters.

After kilning is ground into a rough flour or grist.  This in turn is mixed with hot water into a mashing maching and then passed into a larger holding vessel more commonly known as a mash tun.

The process at this stage is just like making a pot of tea.  Hot water is passed through the grain up to three times and this flushes out the  enzymes and sugars to make alcohol.  The brown liquid, known as worts, passes out through the preforated bottom of the mash tun where it is collected and cooled.

The worts are then transferred into wooden or stainless steel washbacks, where yeast is added and the fermentation begins.

The yeast eats the sugars and enzymes  in the malt, producing alcohol and carbon dioxide.  The proces takes upwards of fifty hours and produces a sharp and sour beer due to the second fermentation provoked by bacteria.  The result is a distillers beer known as wash.  It has a strength of 5% to 9% ABV and this solution is now ready for distillation.

Most, but not all single malt whisky is distilled twice in large copper kettles known as pot stills.  Distillation is the process of heating the solution to boil off a variety of alcohols - all of which have different boiling points - and collecting the ones the distiller wants by separating them out and condensing them back from vapor to liquid.

The first distillation takes place in the wash still.  The still is heated, the vapors rise and pass up the still towards the tapered neck, then pass down a tube known as the lyre arm, where they are cooled in a condenser by cold water passing over the outside of the copper.  The first distillation passes through the spirits safe into a receiving tank, known as the low wines or feint receivers.

It is from the second distillation that the distiller will collect his final spirit.  This time around he must carefully monitor the spirit and separate out the proportion of the run that will adversely affect the taste of the final alcohol.

When the moment is right, the distiller will transfer the flowing spirit to  a different holding tank.  This new make spirit  will be kept to make whisky - it forms the middle or the heart of the run.  The longer the run will continue, the weaker the spirit will become and once again, the distiller must decide when the "cut" is complete.  At this point, the distiller transfers the spirit into a third tank, where the rest of the run (the tails or feints) is rejected and passed back for the next distillation.

New make spirit is clear and strong and has flavors (young, yeasty and cerealy) with strong fruit flavors, often green apples and liquorice - and in the case of whisky made using peated malt - a dense wood bonfire taste and aroma.  Water will be add to bring it down to a strength of around 63.5%.  It is then put into oak casks.

Under Scottish law, spirit can be described as whisky only after it has been matured in oak casks for at least three years.  There is, however much scope for flexibility when it comes to the sort of casks used which will have a major impact on the flavor and quality of the final whisky when it eventually comes out of the cask. 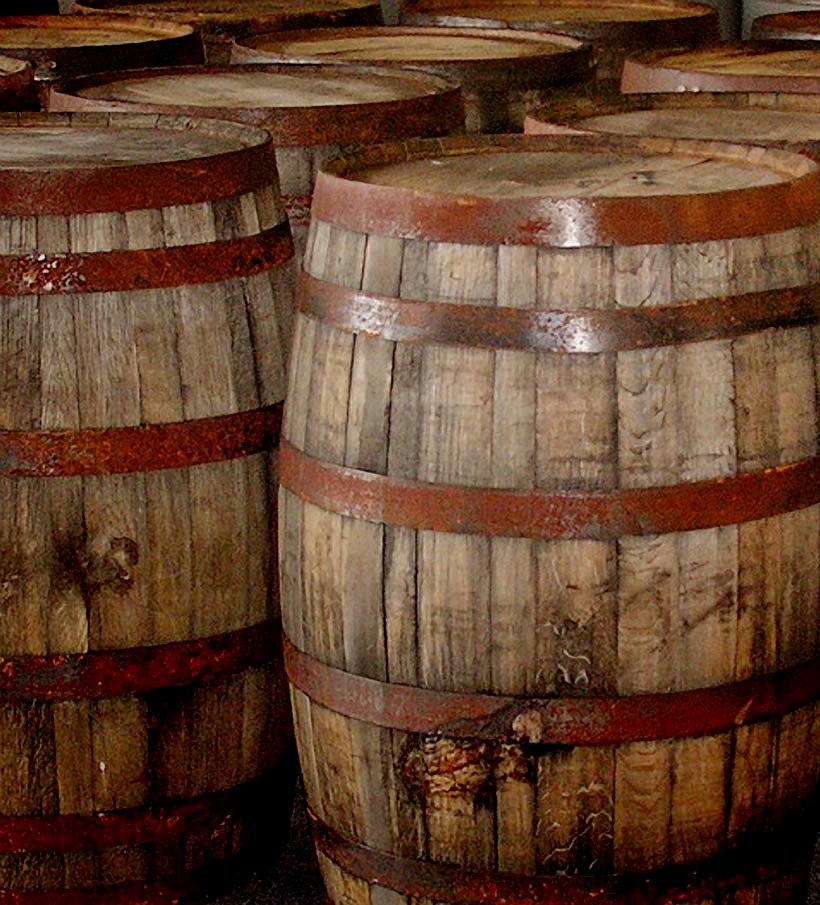 By far, the highest proportion of casks are made of American oak, but a significant are made of European oak.  European casks are about ten time more expensive, but some distilleries make the outlay because they say it is essential to maintain the distinct nature of their whisky.

New oak casks would be too powerful for malt, so in the vast majority of cases malt whisky is matured in casks that have been used for something else previously like bourbon or sherry and will greatly influence the flavor of the malt.

The Mystery Of Casks:

It is in the casks that the real magic of malt takes place.  Casks come in a variety of sizes: Barrels (180 litres), hogsheads (250 litres), puncheons (450 litres), and butts (500 litres).  Smaller casks, are occasionally used as well.  The reason for this is that the smaller the cask the more liquid inside of the container can come into contact with the wood, and therefore, more influence the wood can have on the whisky.  Temperature is an intrinsic part of this as well.  Scotland's damp and cold climate ensures a stately and gentle maturation, lasting years.

Wood imparts color and taste to the whisky.  As the liquid warms it expands into the wood.  As it cools it contracts away from the wood, drawing with it, color and flavor. The spirit will leave some fats and impurities in the wood, effectively removing some flavors, and also the wood and the whisky will react with each other of create whole new flavors.

The more times the cask is used to make whisky, the more tired the wood will become and the less effective it will be at adding flavor.  So, when whisky is added to a cask for the first fills, the influence of sherry or bourbon will be at its strongest.

After three years in a cask, the spirit can legally be called whisky, and at some point after that it will complete its maturation and be removed from the cask for bottling or blending.