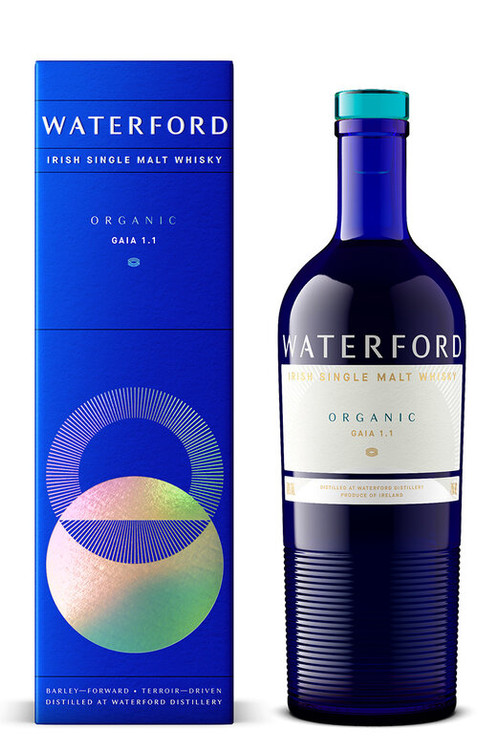 The Arcadian Series represents an otherworldly garden of delights. Waterford Distillery sought out maverick farmers, inspirational growers, iconoclasts whose ethos & way of life respects the land & the old ways in the pursuit of pure flavors over yield imperatives. Gaia, the neopagan goddess of yore, a personification of Mother Earth herself, is a fitting custodian to bring forth Ireland’s first whisky distilled from certified organic Irish barley.

Each bottle of Organic GAIA Edition 1.1 has a TÉIREOIR code, which offers an unparalleled level of bottling information on the barley, maps, imagery and even audio from the farm.

This is a totally natural whisky, with no coloring, chill-filtration or additives whatsoever.

Waterford Distillery is located on the banks of the River Suir, in Waterford, Ireland. Originally a high-tech Guinness brewery, the site was purchased by a private team and converted to distillation in 2015. Waterford uses only 100% Irish malted barley from 86 Farms - including Organic (Ireland's first), Biodynamic and Heritage grains, grown on 19 terroirs across the South East of Ireland. The distillery uses a spectrum of super-premium oak: 50% US First fill, 20% Virgin US, 15% Premium French. 15% Vin Doux Naturel (sweet fortified wines). Waterford Irish Single Malt Whisky is double distilled, first in an 17,000 litre Wash Still, then 11,000 litre Spirit Still. The distillery produces approximately 1,000,000 litres of spirit a year. Production uses a mash filter as opposed to a traditional mash tun, extended fermentation times to over 120 hours - almost twice the industry standard - to allow for a secondary, malolactic fermentation, rare for the industry. This ensures every last bit of flavor is extracted from each terroir, each farm. Waterford founder Mark Reynier is an industry iconoclast for taking on both the corporate Irish and Scotch whisky world with his totally unique concept of terroir in whisky.

Every bottle of Waterford whisky features its own pioneering TÉIREOIR code. Once entered the code will reveal a host of unprecedented and engaging content related to the release. Using rich photography, and drawing upon our unrivalled digital logistics systems that collects thousands of data points, you will be able to discover maps, the harvest, the grower, distillation details as well as view the full spectrum of wood.

PALATE: Heat and zesty pepper on the tongue, cloves, figs, oiliness that dries in the mouth, cherries, butterscotch, pears, malty, layers of spice.

FINISH: Long zesty oiliness that dry’s but leaves you chewing with sweetness that comes right at the end.