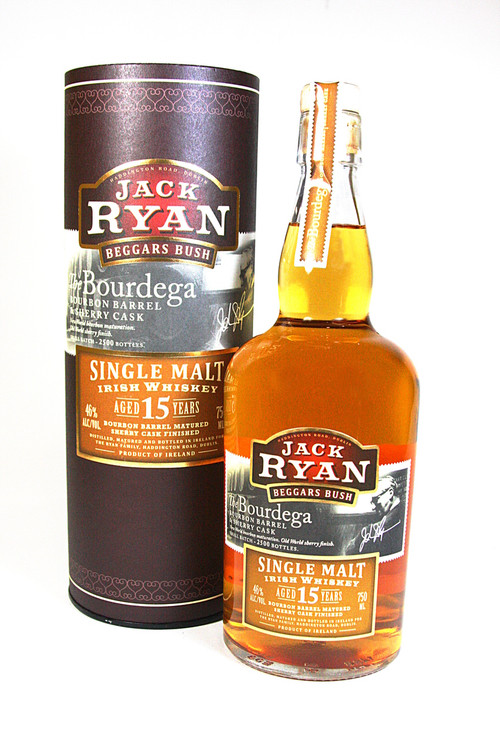 A vatting of bourbon and sherry casks, bottled at 46% by the renowned Cooley distillery. Only 2500 bottles available worldwide

The Ryans have been six generations in the whiskey business. In the 1820’s, John learned his craft in the Limerick Distillery (later Walker’s), before moving to manage Birch’s in Roscrea, Tipperary, near to his home farm in Toomevara. Son Michael worked with him and also supplied barley from the farm. Thomas (1873) oldest of his and Maria’s 12 children, was born when Irish whiskey still ruled the world (there were 5 distilleries within 50 miles of home), though Ireland itself was recovering from the Great Famine his grandparents had lived through, and Europe was in a turmoil of republican fervor. Thomas preferred the whiskey business to tillage, fascinated by the finishing of barley rather than its sowing.

At twenty one, he made the move to Dublin, second city of the British Empire, home to legendary distilleries, intent on making his mark, through the vintner’s trade, on the whiskey world. Following a long apprenticeship, he specialized in what became his life’s passion – to source, finish and bottle his very own whiskey, one that would display the family name. He finally hit on  Ryan’s Malt, which became a firm favorite of Dubliners, the astute Thomas supplying the trade and dispensing in the string of city public houses he purchased along the way.

Thomas’ son Jack  (1915) – consummate whiskey man, publican par excellence and Dublin man-about-town – carried on the tradition until Irish whiskey’s decline and (almost) fall brought a pause, and he soldiered on in the pub trade. His son Eunan, born to the drinks business, grew up hearing about the Ryan’s Malt days, and resolved to revive the tradition. Plans he hatched in the 2000’s culminated in the establishment of The Jack Ryan Whiskey Company, with a clear focus on quality finishing of premium single malt. “Ryan’s Malt” was revived a century after it first appeared, two centuries after John’s sojourn in Limerick, with the release of Jack Ryan 12YO Single Malt. It has already garnered a San Francisco Gold and Best in Class in the prestigious Irish Whiskey Awards. Meanwhile Irish whiskey has resumed its rightful place in the world and the future looks bright.