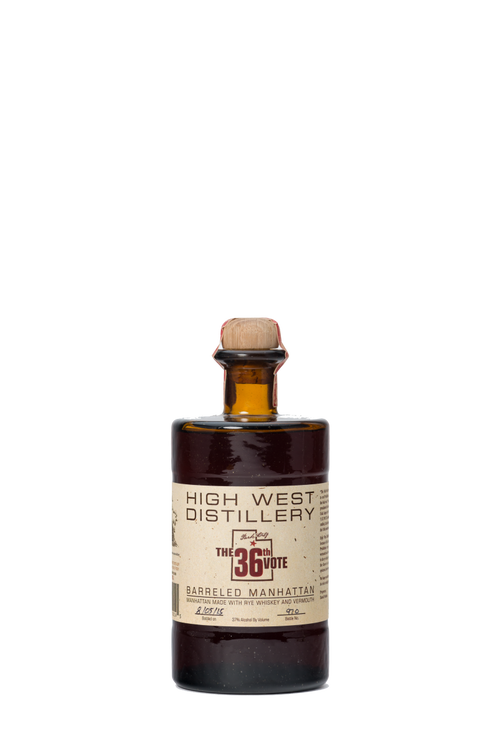 Served Neat, On The Rocks, or Stirred and Strained with an orange or lemon garnish.

“The 36th Vote™” commemorates Utah’s role as the deciding vote to end Prohibition. In fact, the Utah delegation WANTED to cast the final vote. “No other state shall take away this glory from Utah” proclaimed the leader of the state delegation and president of the Utah League for Prohibition Repeal. On December 5th 1933 at 5:32 PM EST, satisfied that the thirty-fifth state (Pennsylvania) had ratified, Utah delegate S.D. Thurman cast the last ballot for Utah and the 18th amendments’ fate was sealed. High West Distillery chose the Manhattan for this celebration because of its classic appeal and timelessness. We also think a Manhattan is the perfect mixed drink for the cold weather at this time of year. We used the pre-Prohibition recipe of two parts Rye Whiskey to one part sweet vermouth and two dashes of bitters. We then married the mixture in the rye whiskey’s American white oak barrel for 90 days, allowing the flavors to integrate in a well-balanced harmony of the rye’s spiciness, the vermouth’s herbs, and the bitters’ complexity. We hope you take time to celebrate Repeal Day and thank Utah for its role in ending the Noble Experiment.

Manhattan made with Straight Rye Whiskey and Vermouth

"...a beautifully harmonious take on the Manhattan...”
-Thirsty South

“...this isn’t some rotgut nonsense, 10 percent alcohol bulls&*% in a single-serve bottle. It’s the real deal, and top shelf at that...Incredibly impressive...”
-Drinkhacker.com