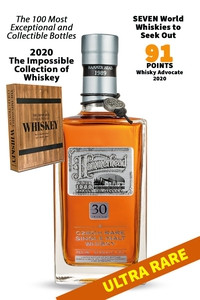 This 30 year old whisky is being released to celebrate the 30th anniversary of the Velvet Revolution.

The Velvet Revolution was the non-violent transition of power in what was then Czechoslovakia, occurring from 17 November to 29 December 1989. This became the end of 41 years of one-party rule.Even though the barley was 100% Czech and the water used in production was from the Bohemia region, the biggest struggle was the peat that originated from the Czech region. At the time, it was almost impossible to find a peat of the desired quality, therefore a Scottish peat was imported with great effort during closed trade times.

PURE PROVENANCE - Whilst crafting Hammer Head, crystal clear water rich in iron and minerals from the Bohemia region is used which positively influences the final liquid taste and overall experience in a way that only true whisky lovers will note.
Much of the taste originates from the oak barrels, left to rest in a sleepy picturesque distillery. The stillness and fresh air in Pradlo, far away from the tumult of the city, enrich the flavor of Hammer Head.

Nose: At the beginning there is a slight touch of dryness, which eventually turns into sweetness. Subtly liqueur-ish with faint hints of turpentine and noticeable fruit (pear), as well as herbal and floral perfume notes (jasmine). Mixing with water triggers wooden spices (nutmeg) and a flavor of leather, along with a dash of vanilla and a subtle nutty aroma.

Palate: Medium body, initially dry but with a very clear, sweetish aroma of barley. Syrupy and slightly citrusy and floral (jasmine), giving the impression of a herbal liqueur along with fresh tannic fruit (cherries and plums).
Mixing with water overwhelms the spices (anise, nutmeg) to release flavors of honeycomb with a touch of vanilla in the background, and roasted coffee.

Finish: Long and dry with hints of peppery spice (nutmeg). Herbal (jasmine) with a slight impression of tobacco and a trace of smoke and mint.

Impression: A pleasant and surprising Czech malt. Although the Czech oak barrels are made of fresh wood, the effect is not dominant. Indeed, it is the cereal aromas of malted barley that dominate and there is a mild liqueur-ness along with wooden spices, anise and nutmeg. As for the nose, there is a very interesting floral, even perfume-like fragrance of jasmine. It is a very drinkable and balanced whisky of a distinctive “malty” character with some tiny indications of the Scottish Lowland style in a slight trace of smoke (Guaiacol from oak). After a long stay of 30 years in the barrels, it completely and unexpectedly surprises with freshness and vitality.