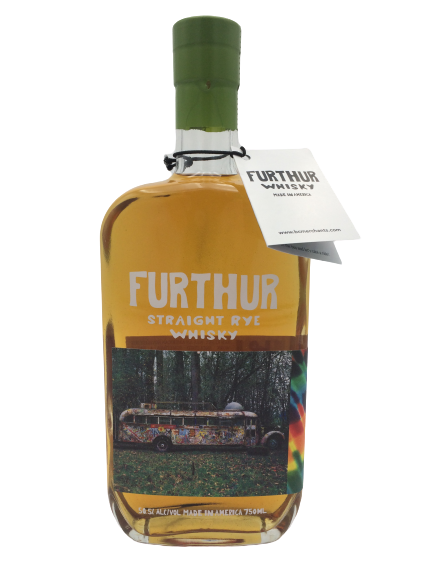 Furthur Rye:
Furthur Rye is a blend of 2 yr 4 month aged Rye Whisky in newly 4 charred American Oak 53 gallon barrels. Distilled at MGP in Lawrenceburg, IN, bottled in Pebbroke, KY at 101 Proof Non-chill filtered.  Filled 10/20/2017, Bottled 3/2/20 Mash Bill 95% Rye, & 5% Barley Malt
The Inspiration:
Ken Kesey was an American novelist.  His work included ‘Sometimes a Great Notion’ and ‘One Flew over the Cukoos Nest’.
Born in La Junta, Colorado and raised in Springfield, Oregon, Ken graduated from College with a BA in Speech and Communication in 1957.
He was an iconic figure in the 60s and with the Psychedelic Counter culture.  Too young to be a Beatnik and too old to be a Hippie, he considered himself a bridge between the Beat Generation of the 1950s and the Hippies of the 1960s.
Furthur is a 1939 School Bus that was purchased by Ken using his earnings from his best selling novel, ‘One Flew over the Cuckoos Nest’.  In 1964, Ken and his group of “Merry Pranksters” wild with life and a lust for big fun, painted the School Bus in Dayglo colors and filmed its “Trip” across the US.
That’s when it all began… Today, the fine folks of BC Merchants have selected some amazing whiskey from well known MGP to bring you Furthur American Whisky and Rye.
A portion of the proceeds from each purchase will be used towards the Bus Preservation Project, a mission to restore the bus to its original glory and preserve it for the future.
The bus is symbolic of a time of change and encompasses a freedom we continue to chase.
Get on the bus and let’s go Furthur!