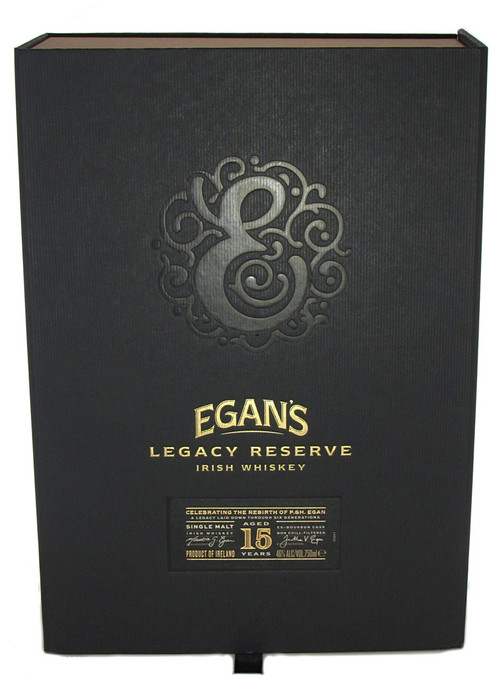 THIS SUMPTUOUS SINGLE MALT IS NON-CHILL-FILTERED TO RETAIN THE UNIQUE CHARACTERISTICS OF THE CAREFULLY SELECTED CASKS.

Where it all Began

Patrick Egan, a solicitor from Moate, is descended from very old Westmeath stock. His forbearers fought at the famous Battle of the Boyne in 1690, and again at Aughrim in 1691. Two of three Egan sons were killed in battle and the third was withdrawn from his priestly studies to preserve the family name.

The surviving Egan did indeed marry, ensuring the survival of his bloodline and carrying the Egan name into the 18th century. This is the backdrop to a fascinating legacy that lives on to this day.

Generations in the Making

In 1835, in the House of Commons, Daniel O'Connell nominated Patrick Egan as Crown Solicitor of Westmeath, a position he held for 40 years. He set his sons up as merchants, expanding from Moate in County Westmeath to Tullamore, County Offaly in 1852.

Patrick's sons, Patrick James and Henry James Egan, established P. & H. Egan Limited and grew the business into a well-recognised and prosperous enterprise, one of the most important in the region at the time.

Patrick J. was a benevolent and devout Catholic who held the welfare of his employees and fellow townsfolk close to his heart. A renowned workaholic and popular introvert, Patrick was the commercial brains behind P. & H. Egan Limited.

Not only was he the driving force for expanding the business into its many interests but also instilled some the highest of standards regarding work practices at the time.

The Business of Business

At its height, P. & H. Egan Limited had a hugely diverse array of business interests. They were general grocers, hoteliers, ironmongers, maltsters, brewers, and bonders to name just a few.

The Egan brothers were formidable businessmen, whose passion and drive left an indelible mark on the commercial, political and social history of Tullamore, in the heart of Ireland.

Henry J. Egan was a passionate Irishman and the company’s public speaker. In 1881, Henry and others were charged under the Coercion Act and jailed in Naas, Co. Kildare, for organising a 'monster meeting' at Clara, for Charles Stuart Parnell, an Irish nationalist and freedom fighter.

Upon his release, Henry was to become a town commissioner and was elected the first Chairman of Kings County Council.

In I883, Egan's Tullamore Brewery employed 50 people, producing 30 to 40 barrels of ale per day. Growth led to the addition of new warehousing in 1886 and two years later an impressive 5,000 ton maltings was built. Further expansions occurred in 1890 and 1896 - the year P. & H. Egan Limited was formally registered as a Public Limited Company (PLC).

In 1889, Capt. Thomas Armstrong Drought, the High Sherriff of King's County, wrote of Egan's saying "their beer is very good and their 'eau de vie' (whiskey) is excellent".

Egan’s Tullamore Ale was recognised as the finest dinner ale available in Ireland at the time. Indeed, such was the reputation of our whiskeys and ales, expansion into the much larger UK market quickly took hold.

An apprentice carpenter employed by P. & H. Egan Limited, John Spain, was one of a number involved in the 'Tullamore Incident', where the first shots of the famous Easter Rising were fired, on the 25th March 1916. This was the beginning of a long, bloody journey to Irish independence.

Spain was arrested at the Egan's workshop and taken to Tullamore R.I.C Barracks, before being released one month later. He fought right through the War of Independence and moved steadily up the ranks of the Irish army, becoming a Company Captain soon after.

The Egan family set about resurrecting their family brand in 2013. Family members from across the globe, across generations, came together and reformed P. & H. Egan Ltd. Family-owned and operated, the Egan’s portfolio embodies the true spirit of Irish whiskey, six generations in whiskey.